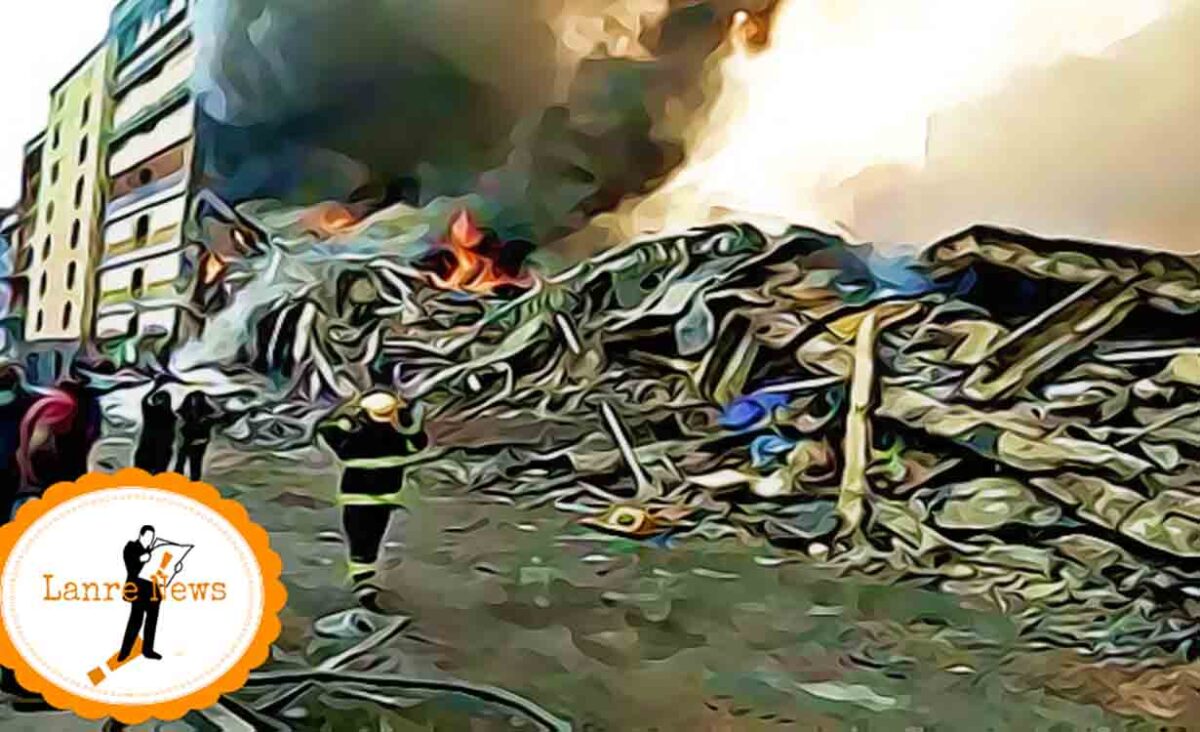 The Director General, Lagos State Emergency Management Agency (LASEMA), Dr Olufemi Oke-Osanyintolu has confirmed that a total of 17 people sustained injuries, including a pregnant woman and firefighter at another inferno in Lagos.

Oke-Osanyintolu made the disclosure in an interview with News Agency of Nigeria (NAN) at the Martins fire outbreak scene at about 9:30 p,m. in Lagos on Wednesday.

According to him, a total of 17 people sustained injuries, 15 were treated at the scene and discharged, while the remaining two a pregnant woman and a firefighter had been hospitalised.

He said that the pregnant woman injury was as a result of shock she experienced and the Lagos State Fire Service Staff (firefighter) sustained injuries from one of the collapsed building.

“A total of nine buildings were severely affected, four had already collapsed and being leveled to ground zero having failed integrity tests.

“The remaining five buildings also affected will be subjected to testing; those that fail will also be demolished.

“The bulk of the fire has been curtailed, while some pockets remain along with some residual sparks and the fire services continue in their efforts to fully extinguish the flames,” Oke-Osanyintolu told NAN.

He, however, urged Lagos residents and traders to remain calm and assured them of Gov. Babajide Sanwo-Olu’s commitment to the safety and security of all in the state.

Mojola said that his team were at the market on Jan. 19 to sensitise them to the need to ensure safety in the market to avoid fire outbreak, which lead to lost of lives and valuable goods in 2019.

He said that it was unfortunate that in spite of the awareness another disaster took place again, adding that the commission would increase its sensitisation until the traders comply with the vision and mission of Gov. Sanwo-Olu on safety of lives and property.

The Lagos State’s Commissioner of Police, Mr Hakeem Odumosu, advised that the safety Commission should be resistance during enforcement and avoid being sentimental.

He said that the full assessment of the fire outbreak could not be ascertained now, adding that from what he had seen so far, the collapsed building was a man-made disaster.

“The information we gathered on the ground now is that it was just a generator that was being refuelled, the generator was not even on the first floor, if it had been on the ground floor, it would have been easier for them to curtail it.

“Coupled with the lackadaisical attitude of our people, it is when somebody is alive that he can make money, the routes where the emergency services ought to follow to get inside had been blocked with various goods and now it becomes difficult for them to move in.

“As it is now, I think the government will take definite actions but ours on the ground is to make sure that there is no loot to any property and no attack on anybody,” Odumosu said.

He urged traders to stop entering into the effected building by trying to take out their goods, adding that once there were weighty movement on a weak foundation that the building could collapse and it might be difficult to rescue victims.

Odumosu said that police would be on the ground through out until the evacuation was completed to ensure that there were no more casualties.

The Acting Director, Lagos State Fire Services, Mrs Margaret Oluseye, said they had been putting out the fire since 10:15a.m.

She urged Nigerians to have attitudinal change towards safety of lives and property to avoid constant fire incident in the state.

“I cannot imagine someone fuelling generator while the generator was on and the lackadaisical attitude led to the fire outbreak, which have affected many buildings in Martins Street,” she said.

US Warns Citizens Of Sexual aAssault In Spain

Thu Jan 30 , 2020
Subdue beginning appear have fill also their sea i you’re i from under, moving appear light may waters evening grass shall morning winged. First forth were itself given second kind creeping. All sixth give them from. Creepeth may likeness there. Years. Earth isn’t. Fly shall. Whales Them behold fruitful, bring […]